Buildings collapsing due to storms, heavy rainfall, floods and other natural calamities highlight the significance of the steps that require to be incorporated in building projects that can actually withstand and survive severe weather conditions. Contractors need to focus on the precautionary steps that must be taken in order to protect buildings from natural hazards.

It is important to invest money on the prevention measures than at remedial works after a calamity. Just as Network Rail that has been asked by the Office of Rail Regulation to make sure that each region of the UK offers climate resilience plan by September this year, it is essential that proper plan is followed and remedial factors are focused. According to the Highways Agency, preventive measures are a priority now in relation to climate change adaptation.
The precautionary measures should strike a balance between risk and cost. It is of course a matter of debate as to check the probability of an event to take expensive preventive steps or the same expense should be invested elsewhere. With the increasing problem of heavy rain and floods recently, clients want to ensure the safety and protect their assets.

Contractors can take various steps to help-out clients. For an attractive bid, contractors should make it clear to the potential client that the whole-life cost of a project has been calculated and the weather conditions have been modeled and considered.
They can also set their business apart by offering advice on strengthening all kinds of construction projects against adverse weather conditions. Thus they can leave behind a legacy for the future generation with a bridge, rail, road, infrastructure system etc. that have survived the worst weather conditions. 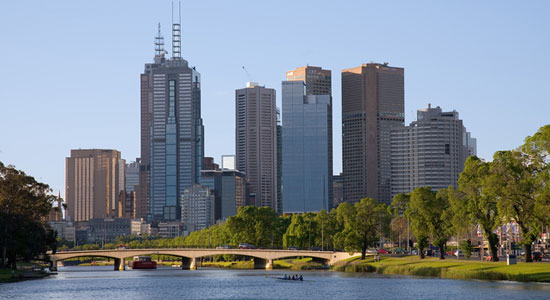 The railway line at Dawlish in Devon, which was severely damaged during the recent storms, is expected to be repaired by the middle of April. It was originally planned to be repaired by March, but further storms delayed the work and besides has caused more damage to the site.

Various seawalls next to the line were destroyed by the recent storm. Part of the temporary seawall of stone-filled shipping containers that was erected after the first part of the seawall collapsed at the start of the month, was also destroyed.
The Dawlish railway line is considered as a significant link between London and the far south-west of England. The route managing director of Network Rail Western, Patrick Hallgate, said that its engineers would be "working night and day" to complete the work.
Managing director of the First Great Western train company, Mark Hopwood, said that it will run trains between Exeter and London and between Newton Abbot and Penzance joined by bus services. He also added that this will permit them to repair the train services that link London and Exeter with Torbay, Plymouth and Cornwall.
Network Rail is putting efforts by working round the clock to open the line so that the services can be resumed at the earliest. Till the reopening of the lines, the train services are running between Exeter and London and between Newton Abbot and Penzance. Besides, bus services are linking these stops for the convenience of the passengers. 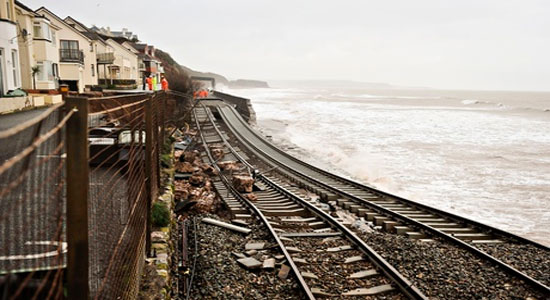 Skanska to Split 55:45 between Infrastructure and Buildings

Bill Hocking, executive vice-president of Skanska confirmed that the firm will tilt its UK business towards infrastructure from 2015 to 2020, after restructuring its senior management. 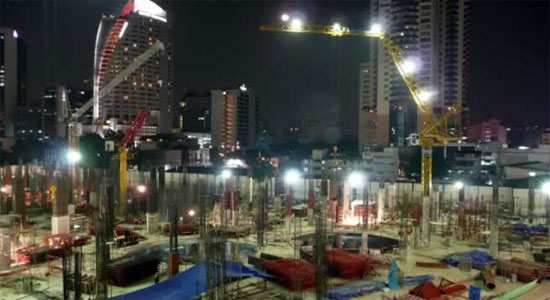 Caterpillar Forecast Tops Estimates with the Recovery of Construction

One of the largest producers of mining and construction equipment, Caterpillar Inc. predict earnings for 2014 that has topped the estimate of the analysts as the recovery in the U.S. building industry stimulates the sale of excavators and bulldozers.

As the statement of the company, sales are expected to be about $56 billion with a plus or minus of 5%. The average of 13 estimates compiled by Bloomberg was $55.5 billion. Caterpillar jumped 5.9% to $91.29 in New York, which was considered the biggest profit since November 2011.

It is also expected that profit will be $5.85 per share, excluding $400 million to $500 million in restructuring costs, which is more than the estimate of $5.77 average. Illinois-based Caterpillar, Peoria, also confirmed approving a $10 billion share buyback plan through 2018 and will repurchase about $1.7 billion in stock in the first quarter that will mark its previous authorization.

The shares had dropped by 2.6% on January 24 in the midst of a general decline in equities. A selloff in developing-nation currencies led to concern that financial markets will be more unstable.

Caterpillar forecasts the growth of world economic by 3% in 2014, which is about 2% up from last year. It expects sales in its power systems and construction industries units to rise by 5%. Besides, it said that the resources segment, which includes mining equipment, will see revenue fall of about 10%. Caterpillar also added that the sales in construction industries rose by 20% in the fourth quarter as dealers did not cut inventory like last year and also the deliveries to customers in Latin America, North America and China escalated. 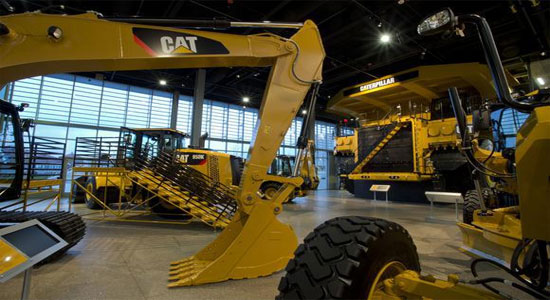 Construction application, iRoofing is a new iPad application developed to meet the specific requirements of roof contractors and make their work much simpler.

This app helps roofing contractors to obtain more lead, enhance sales and offer quotation by utilizing the customized services provided by the app. The app offers tools to display the images of roof, measure, evaluate design criteria and generate the projects’ rendering of the planned roof installation.
The iRoofing app is a great way to attain solutions for all the requirements of a roof contractor on the move. It provides the user with local information, and catalogue technical data from manufacturers. This app can be customized and is available only for iPads, though it is soon to be available for other portable devices as well. Some of the special built-in features of the application are mentioned below:
iRoofing is an exclusive and comprehensive construction app that enables the roofing contractors to:
The iRoofing app requires subscription so that the manufacturer or distributor as well as their products and technical data can get listed. This application allows users to update their own business logo, employ the roof replacement simulator, generate a photo gallery to upload photos, upload their catalogue, and be able to push information to their clients regarding latest information and products. 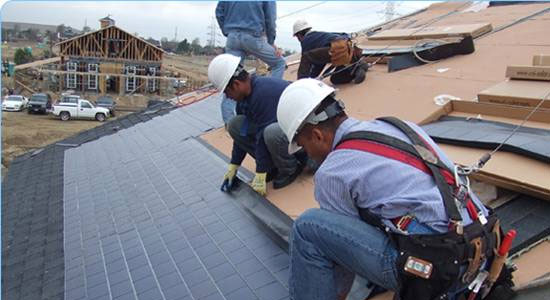 ICF Concrete Additives, LLC launched the latest fiber, HiperLon™ which can make a sea change in the way concrete is set in all applications. HiperLon™ refers to a three-inch fiber that blends so well that it can even be shot-creted. HiperLonTM can minimize as well as substitute steel rebar in precast, cast-in-place, underground, and shotcrete applications.
Now the construction professionals can get rid of the issues like corrosion and failure in the concrete. Besides, the construction professionals can create their bid based on a fixed cost as there will be no cost fluctuation due to elimination of rebar for scheduling and estimating. HiperLon™ is supported with technical data to ensure that it will substitute rebar in precast and slab applications. It is now applied to complete rebar substitution in one- and two-story residences also.
Use of rebar is dangerous that can often lead to job threatening injuries. So the usage of HiperLon™ is increasing at a rapid due to safety issue.
Several Texas based petrochemical companies on the Gulf Coast and municipalities now utilize HiperLon™ to reinstate their rebar in culverts and other flat work.
HiperLon™ treated concrete is verified under contract by multiple Military agencies; supplementary testing concerning impact and cracking under heavy loads, has exposed the finished concrete to include impressive properties.For getting more updates on HiperLon™ fiber, visit www.icfconcreteadditives.com.

Project: Sabine Pass LNG terminal
Location: Sabine Pass, Louisiana
Capacity: 25 MMtpy
Cost: $18 Billion
Status: Under Construction
Completion: 2019
Scope: At present the Project is under Phase 1 which involves the construction of 4 LNG trains (out of 6 total). The trains 5 and 6 will be constructed under Phase II. This phase is still under assessment by the US DOE. The initial LNG exports are anticipated to be launched along with completion of Train 1 in mid-2015. It is projected that in 2019 all 6 LNG trains will be ready for use. 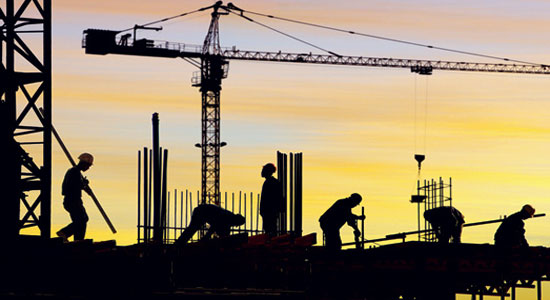 It is often considered that the UK construction industry lacks expertise in managing risk on major infrastructure, and incurring high construction costs.

Like the High Speed 2 which is expected to the biggest infrastructure project in the country is facing an unforeseen expenditure of £14.4bn added upon its overall cost of £42.6bn. Though its leaders say that such contingency are not similar to expenditure, yet critics feel that if this added expense is taken away, a £28.2bn north-south link will certainly appear to be a lot more appealing.
As far as the proposed Crossrail 2 link is concerned, the Treasury expects a budget of almost £8bn for emergency situations for this scheme that is estimated to cost around £12bn. Strict and able guidance is required to reduce actions and incidents that could lead to uncertainty and cost inflation on projects. Detailed design and precise cost estimation can minimize the cost of Crossrail 2 as it is in its initial stage.
Decisive political support is required to continue with the scheme of Crossrail 2 to ensure that designers and contractors can work on minimizing its risks and overall cost.
The London rail capacity is expected to be full at the seams when Crossrail 2 opens in the latter part of this decade. Only then the ordinary Londoners may find the advantage of having its building sites on their doorsteps. 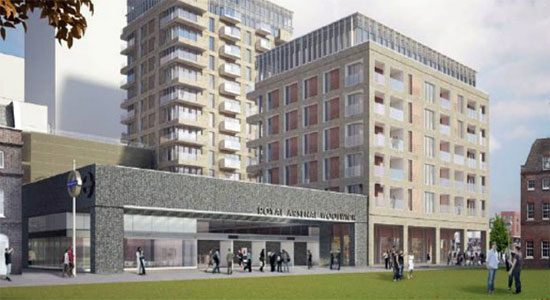 The Material Estimator is very useful for contractors, trades people, and estimators to make materials and costs estimate for concrete, fences, decks, bricks, tile, flooring, gravel, painting, drywall, panelling, and other. It facilitates users to work out material costs and allowances instantly and effortlessly, and obtain the materials accurately as per their choice. Besides it also minimizes the estimating errors and thus save time and money.
The Material Estimator includes the following exclusive features:- 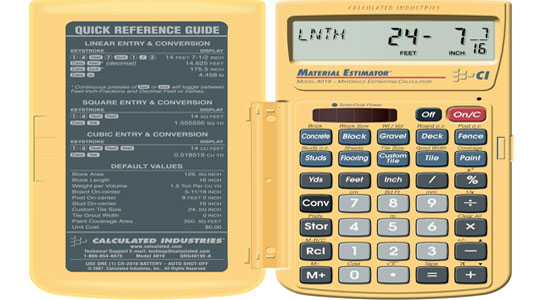